A History Compiled by Jamilla-ann Bethune, William A. Zellmer , and Waneta Sage-Gagne, 2002 Updated 2012.

This page highlights a few of the milestones in ASHP’s development, concentrating on the organization's early years, with emphasis on educational programs (institutes) for hospital pharmacists, minimum standards for hospital pharmacy practice, and comprehensive surveys of practice and publications. The history recited here conveys a sense of how the organization has progressed from 153 charter members to more than 44,000 today.

1920s
Hospital pharmacists as early specialists in pharmacy supported the development of an organization that would represent their particular interests. By 1921, hospital pharmacists in APhA formed a committee that was part of the Section on Practical Pharmacy and Dispensing.

1939
By the 1930s, individual states had formed their own hospital pharmacy organizations, Dean Edward Spease of Cleveland’s Western Reserve School of Pharmacy had published his set of Minimum Standards for Hospital Pharmacy, and the Sub-Section on Hospital Pharmacy was formed in APhA.

1940
In 1940, Harvey A.K. Whitney, Chief Pharmacist at the University of Michigan Hospital, who was then chairman of the Sub-Section, suggested at an APhA meeting that there was a need for “a unified organization of hospital pharmacists.” Subsequently, he and other hospital pharmacists prepared and submitted for final approval a constitution and bylaws.

1942
After years of work by many individuals committed to the idea that hospital pharmacy needed separate and distinct representation, the American Society of Hospital Pharmacists was formed, with a charter membership of 153 at the APhA Annual Meeting in Denver.

1945
The original constitution identified three important areas that ASHP would concentrate on:

ASHP continued to work to achieve these three important goals. In 1950, APhA and the American Hospital Association approved The Minimum Standard for Hospital Pharmacies. The Bulletin of the ASHP was first published in 1943 and provided opportunities for professional and technical interchange among hospital pharmacists.

1949
The Institutes in Hospital Pharmacy is founded, providing important opportunities for postgraduate education that nurture a strong esprit de corps and professional pride among hospital pharmacists.

1950s
In response to the rapid changes in hospital pharmacy, ASHP receives federal funding in 1955 for the first comprehensive audit of pharmacy practice in U.S. hospitals. In 1957, questionnaires are mailed to more than 3,000 hospitals to gather practice data. Study results are published in the Mirror of Hospital Pharmacy, including recommendations designed to enhance the development of hospital pharmacy.

ASHP CEOs Through the Years

In 1995, ASHP changed its name to the American Society of Health-System Pharmacists. The new name reflects changes occurring in the hospital industry, including consolidation of facilities and diversification beyond inpatient care into ambulatory care and home care. ASHP’s core membership still consists of pharmacists who practice in the hospital setting. 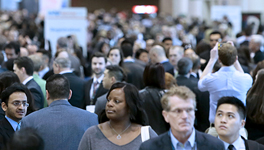 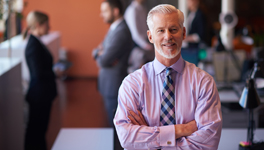