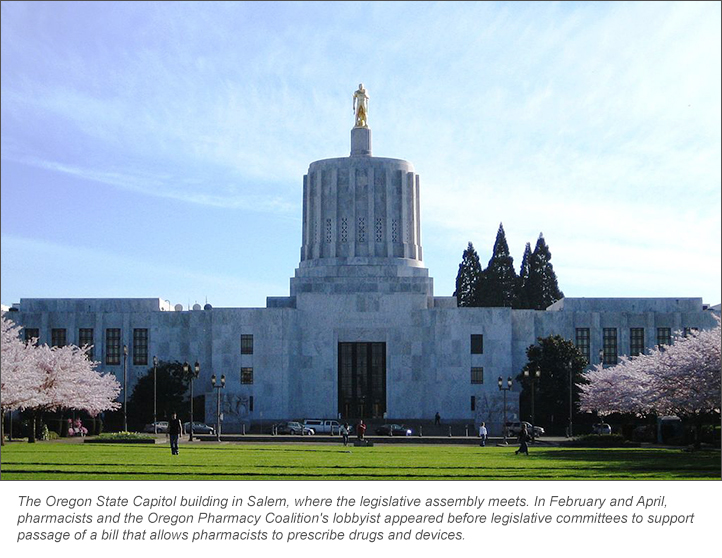 As early as January 1, Oregon pharmacists will be permitted to prescribe and dispense drugs and devices listed on a formulary to be established by the state board of pharmacy under a bill recently signed by Governor Katherine Brown.

The formulary, according to the new law, may contain such "post-diagnostic" items as diabetic testing supplies, smoking-cessation aids, epinephrine autoinjectors, albuterol inhalers, rapid strep tests, and spacers for inhalers.

Other possibilities mentioned in the law are discharge medications during transitions of care and emergency refills of insulin.

"Nothing about this is new territory," said Michael E. Millard, cochair of the Oregon Society of Health-System Pharmacists (OSHP) 2017–18 Legal and Regulatory Affairs Committee, in explaining why the prescribing bill passed the legislature on the first try.

None of the drugs and devices that OSHP and the Oregon State Pharmacy Association described in their jointly prepared literature for legislators has a "diagnostic component," the Pacific University School of Pharmacy assistant professor said.

"You don't need to be a physician to tell if somebody's a smoker," Millard said by way of example.

Bill Cross, lobbyist for the 2 groups' Oregon Pharmacy Coalition, said the bill builds on past legislation and advances pharmacy practice a step further.

Two years ago, Governor Brown signed a bill defining the practice of clinical pharmacy and allowing pharmacists to engage in it. The bill also accorded pharmacists provider status by permitting the Oregon Health Authority to "reimburse" pharmacists for providing any health service within their scope of practice.

Four years ago, the coalition was not as successful. It sought passage of a bill authorizing pharmacists to "initiate or modify drug therapy in accordance with guidelines and protocols" established by medical physicians. Those guidelines and protocols would be between 1 pharmacist and 1 physician and last no longer than 2 years. The bill did not have a legislative hearing.

"We've been trying to really work with the Oregon Medical Association and the Oregon Nurses Association, who typically in the past have been the stakeholders that have had the most concern about the expansion of pharmacy, pharmacy services," and pharmacists' practice activities, Cross said of the coalition's efforts in recent years.

"And so, when we were working with the [2017] legislature," he said, "we tried to incorporate some of the [medical and nurses associations'] concerns and tried to address some of the issues that they had raised to advance this bill."

Thus, the bill that the House Committee on Health Care passed on March 15 included the amendments proposed collectively a week earlier by the medical and nurses associations, the pharmacy coalition, and the board of pharmacy.

Those amendments changed the composition of the Public Health and Pharmacy Formulary Advisory Committee so that it's not dominated by pharmacists, clarified that pharmacists could prescribe and dispense formulary drugs and devices only in accordance with diagnoses made by qualified healthcare practitioners with prescribing authority, and added examples of such prescription-only products.

Left unaltered was the new provision allowing pharmacists to submit ideas for the development of statewide protocols that the board of pharmacy could adopt through the rule making versus the legislative process.

On March 20, the full House passed the amended bill without a dissenting vote.

Likewise, on May 10, the full Senate passed the bill without a dissenting vote.

Governor Brown signed the bill on May 18. It took effect immediately, allowing the board of pharmacy and the advisory committee to take action before January 1, when the vast majority of the new law will go into effect.

"It's full autonomy for prescribing whatever they add to this list," said Kevin Russell, operations manager for the 4 outpatient pharmacies of Samaritan Health Services, based in Corvallis.

Russell, who attended the House and Senate public hearings on the bill in his role as president of the Oregon State Pharmacy Association, said the new law also enables pharmacists to "adjudicate claims for those [drugs and devices] just like we would adjudicate a claim for any other prescription and have the insurance company pay for it."

Millard and Russell said they expected the advisory committee's initial formulary recommendations to the board of pharmacy to be the "no-brainers."

Glucose test strips and smoking-cessation aids, the 2 pharmacists said, are no-brainers from a prescribing point of view.

By authorizing pharmacists to prescribe those products, Oregon would relieve physicians and their office staff of "nuisance" prescriptions, Millard and Russell said.

The new law, however, does not address payment for pharmacists' expertise in prescribing products, Russell confirmed.

"But certainly that's something that we would be pursuing, . . . being paid for our service," he said. "If we're going to have the patient come in for an actual visit and sit them down and talk about how to manage their diabetes and, as a result of that, prescribe them products to support that, then we should get paid for that visit separately."