"We never had an issue of people not wanting to come to work or not wanting to help out," said Alex C. Varkey on Friday, during a 15-minute break from directing pharmacy services at 907-bed Houston Methodist Hospital. "It's just been an incredible experience to see how strong a team we have here."

The hospital, part of the Texas Medical Center, remained in operation throughout the past week despite the storm that struck Houston.

Because Hurricane Harvey had been predicted to hit Texas's Gulf Coast and continue in some form to Houston, Varkey said his hospital and others in the area had been making plans.

The hospital's leadership team estimated that something related to the hurricane would happen in Houston as early as last Friday or as late as Saturday night.

But as the storm neared the coast, it remained difficult to narrow the time frame, he said. The roads soon flooded, becoming impassible.

Not all of the pharmacy personnel assigned to the group to ride out the storm could reach the hospital in time. Neither could personnel already onsite Saturday evening for their regularly scheduled work shift go home afterward.

Pharmacy personnel who had worked the preceding night stayed.

"They had been staying at the hospital ever since Friday night," Varkey said of the night-shift personnel. "So between them and then David Putney and myself, on the management team, and some of our clinical pharmacists, we basically hunkered down during the worst of the storm."

Clinical Pharmacy Manager Putney said the bulk of his team "was able to remote in" from home.

The remote clinical pharmacists, he said, helped the onsite personnel with patient care by conducting medication reviews and consultations.

Pharmacy Operations Lead Manager Linda Haines had been assigned to the recovery team, whose members would relieve some of the staff who had worked at the hospital since the start of the storm.
"I was actually at home," she said on Friday. "My house flooded."

Haines has been living upstairs at her house. She described her losses as minimal compared to those of other hospital employees.

"We have a lot that have lost their houses, lost their cars, lost pretty much all of their valuables," Haines said.

Pharmacist Catherine Pham is among those employees. A widely viewed photo shows Pham holding her 13-month-old son as she is carried by a Houston police officer, who rescued them from floodwaters on Sunday (photo no. 42).

Haines said the hospital is creating a relief fund for employees affected by the storm and arranging a system for employees without a place to stay to find one.

Pei Jen Lin, in her second year of a combined pharmacy practice residency and M.S. degree in health-system pharmacy administration, said watching the hospital's pharmacy personnel work through their exhaustion has been "just incredible to witness."

Lin was at the hospital last Saturday, was able to leave, and returned on Monday when the streets were not as flooded as on Sunday.

She described the pharmacy personnel she saw on Monday as tired and exhausted.

"For patient care, they pushed through the exhaustion," Lin said. "They were doing everything that they could."

Varkey said the hospital's experiences with multiple storms, including Hurricane Ike in 2008 and Tropical Storm Allison in 2001, helped everyone prepare for the week. The pharmacy placed large orders for pharmaceuticals in advance of the storm in case vehicles could not reach the hospital, for example. The hospital discharged as many patients “as safely possible” before the storm, he said, reducing the census to 70–75 percent of capacity.

"Everyone on our team, and I can say this for virtually every hospital pharmacy department that I know" in the Houston Methodist health system and across the city, "the team rallied together," Varkey said. 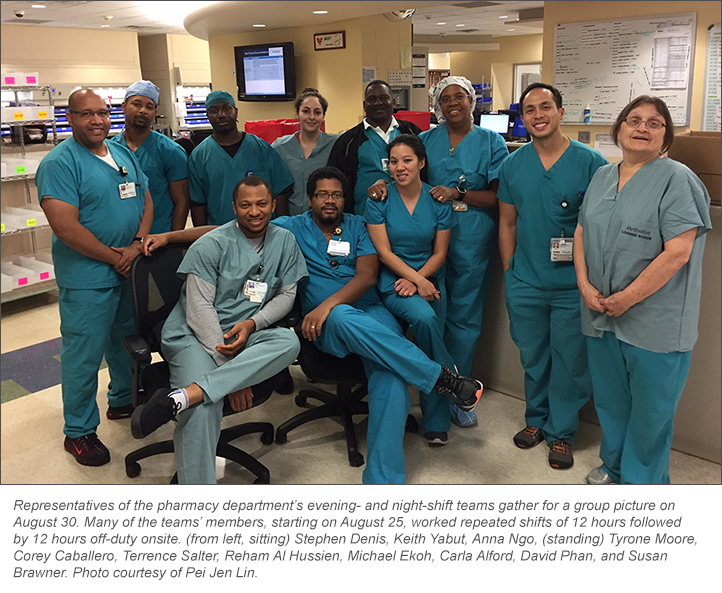