Pharmacy Students in Puerto Rico Among Those Affected by Hurricane Maria 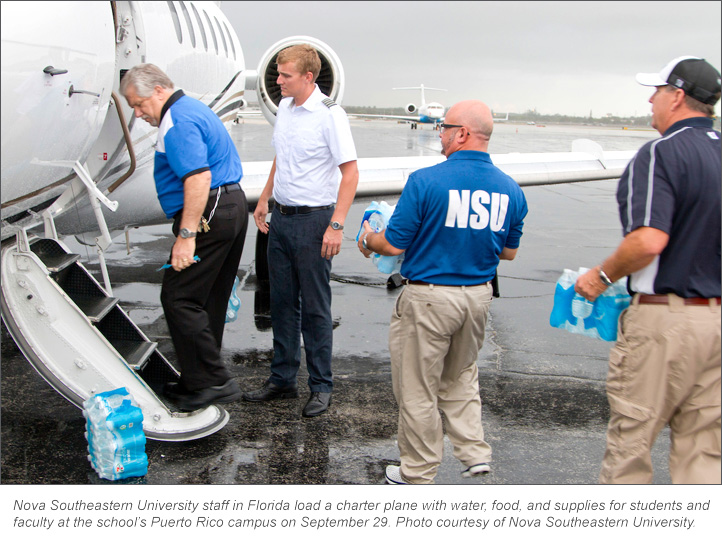 For the faculty and staff of the Nova Southeastern University College of Pharmacy Puerto Rico campus in San Juan, Hurricane Maria brings day-to-day hardship as well as worries about the students’ professional future.

“The students, of course, are very anxious,” said Lisa Deziel, Dean of the College of Pharmacy at its Fort Lauderdale, Fla., campus.

Deziel said the university has heard from all but one of its 15 staff members since Hurricane Maria made landfall on September 20, knocking out power to the entire island and causing widespread devastation for the 3.4 million Americans who live there.

“It’s very heartbreaking,” she said. “And we have at least one student and one employee right now that we know their homes were totally destroyed.”

Michelle Clark, Chair of the pharmaceutical sciences department, and Robert McGory, Associate Dean for the Pharm.D. program, both in Fort Lauderdale, estimated that about half of the school’s 200 students have reported in since the storm hit.

The university established a text messaging system for people to check in, and Clark said a radio message is being prepared to air on the island to reach out to the students.

Students with cell phone service are using the messaging service WhatsApp to stay in touch and sending the university names of people they’ve heard from, Deziel said.

McGory said communication on the island is best in the San Juan area; students elsewhere on the island “haven’t been able to communicate with anybody, because there’s no cell phone service or [working] landlines.”

He said some students are driving into San Juan seeking phone and internet service. But that alternative is also difficult, because students have reported waiting in line for at least three hours to get gasoline.

“And then they’re very limited as to how much gas they can get. So they can’t travel far,” Deziel noted.

Deziel said food and water are also in short supply and can’t be easily transported to where they are needed. Nor can medications for the treatment of chronic and acute illnesses.

Nevertheless, she said, “our faculty has continued to work at their hospital and community-based sites during the aftermath of the storm to help provide services to the people of Puerto Rico.”

Deziel said she’s been surprised, given the hardships on the island, at the students’ determination to continue their education.

“They’re very concerned about their families and their living situations,” Deziel said. “But they are also very focused on their education — and wanting to make sure that they learn the material — and [concerned] that and that somehow we can help them stay on track and not lose a whole year.”

Deziel said she was able after the storm to speak briefly with Blanca Ortiz, the Assistant Dean for the Puerto Rico campus, before losing the phone connection.

“She is working with the students to assist them with access to supplies and whatever other assistance they need and is meeting with them to discuss options on completing their coursework,” Deziel said.

Before the storm struck, McGory and Clark ensured that the corresponding lectures from last year were available online so that the 150 first- through third-year students who were likely to miss classes could download the materials for later use.

Clark said USB drives with handouts and recordings of the lectures were also prepared for the students and put on a university-chartered flight that delivered food, water, and supplies to students and staff on September 29.

“They had about 80 students pick up those USB drives,” Deziel said. “That provided them the opportunity to keep up with some of the material if they’re able. And, of course, we do realize that some of them won’t be able to do that.... We will be working with them individually once we get back into class.”

A second charter flight is scheduled for October 5.

“We are sending water, food, ... and the students [in Florida] are collecting a lot of general supplies to help,” Deziel said. “The Fort Lauderdale and Palm Beach student organizations have been very active in trying to support the students in Puerto Rico.”

All of the Puerto Rico students were offered the option to travel to Fort Lauderdale before the storm and take classes there. Deziel and McGory said several students chose this option, and they are doing well and working alongside their new classmates in Florida.

“They’ve been very heavily supported by the students here, who are embracing them and helping them catch up with the coursework,” Deziel said.

She noted that Hurricane Irma, which hit just before Maria did, shut down the Puerto Rico campus for two weeks and the Fort Lauderdale campus for a week and a half.

Despite the university's offer to relocate students from the Puerto Rico campus to Florida so they can quickly continue their education, the sudden move is not easy for them.

“It’s a huge financial commitment to move here,” Deziel said. “When they move, they have no transportation, they have no support system, they have nowhere to live. So it’s difficult. We are working with the students to help them in that process.”

The university has established a fund, NSU Cares, to help students and staff affected by hurricanes Irma and Maria.

McGory said there’s been an outpouring of support from pharmacy schools and pharmacists all over the country who have offered to take in students and help in other ways.

“We are really appreciative of all the outreach from all the other colleges of pharmacy and everyone who wants to help,” Deziel said.

And the university is already starting to rebuild so that it can continue serving students who want to remain on the island.

McGory said the pharmacy department’s building on Puerto Rico had “a lot of water damage” and some broken windows but has been deemed structurally sound.

“The electricity is back on in the building, we have internet, and landline phones are working,” he said on October 3. The pharmacy building opened this week with limited hours for faculty and staff.

But much remains to be done, and Deziel cautioned that conditions are ripe for a public health crisis on the island if basic services aren’t restored soon.

“People are living on an island that’s very hot, with no air conditioning, with water damage, with broken windows. There is going to be concern about Zika virus and all the other public health things that come along with these kind of living conditions if it goes on much longer,” Deziel said.