After the Storm, Houston Pharmacists Pitch in as Volunteers 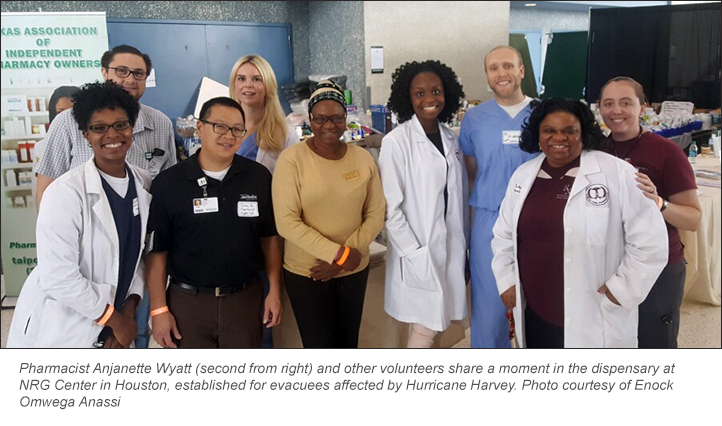 The grim televised images of Hurricane Harvey and its aftermath don’t really do justice to the reality on the ground, says Anjanette Wyatt, founder of the Texas Association of Independent Pharmacy Owners and chief executive officer of Clinical Care Pharmacy, LLC.

“It’s unbelievable, heartbreaking. So many people lost so much, and there’s so much devastation,” she said.

So when Houston’s health department asked healthcare professionals to volunteer their services to assist people displaced by the storm, Wyatt answered the call.

At first, she was the only pharmacist to do so.

“People didn’t actually know about the [need for] volunteers, especially through the health department. They had only had one person who signed up to volunteer, which was me,” Wyatt said.

Among other things, Wyatt said, the health department is concerned about infections spreading among evacuees exposed to microorganisms in floodwater. The department has also warned that people with skin injuries who come into contact with floodwater are at risk for tetanus if they have not received a tetanus vaccine within the past 10 years.

One of Wyatt’s first acts as a volunteer was to solicit medication donations from the owners of local pharmacies. She credited them with quickly supplying antimicrobials and other critically needed drugs for the community.

“Everybody pitched in,” Wyatt said.

She said David Persse, health authority for the Houston Health Department, sought her help locating additional pharmacist volunteers. That prompted Wyatt to ask for help from the Texas Society of Health-System Pharmacists (TSHP).

“TSHP was instrumental in getting the word out [and] getting that information to the right people and getting . . . Texas pharmacists involved,” she said. The Gulf Coast Society of Health-System Pharmacists has also been heavily involved in the volunteer effort.

The facility, with more than 706,000 square feet on one level, began welcoming evacuees during the evening of August 29 and reportedly sheltered more than 1,000 people within a day.

A week after the storm struck, more than 100 pharmacists and pharmacy technicians had already served at least 1 shift at the dispensary, Wyatt said.

Wyatt said pharmacists at the center, in conjunction with physician volunteers, vaccinated evacuees and dispensed “stat doses” of medications for the treatment of psychiatric conditions, hypertension, cardiac disease, diabetes, and other conditions.

A total of 2,242 people were still housed at NRG Center on September 15, according to Harris County’s Office of Homeland Security and Emergency Management. The shelter ceased operations on September 23.