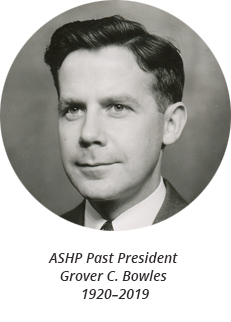 Grover C. Bowles Jr., who led the pharmacy department at Baptist Memorial Hospital in Memphis, Tennessee, for three decades and served terms as President of ASHP, the American Pharmaceutical Association, and the American Council on Pharmaceutical Education, died June 23 at the age of 99 years.

“Grover was an exceptional leader and a legend in our profession,” said ASHP Chief Executive Officer Paul W. Abramowitz. “His contributions to ASHP in its early years and throughout his entire career played an important role in building the strong foundation that has helped ASHP to continue to grow and thrive for 77 years. Grover will be missed by everyone, but his legacy of service to pharmacy and the positive impact he had on so many individuals will always be with us.”

Sheila Mitchell, currently Dean of the Union University College of Pharmacy in Jackson, Tennessee, called Bowles her mentor and pharmacy hero. “He epitomized everything we would want to be or would want the profession to become,” she said.

Mitchell met Bowles while studying pharmacy and was one of many young pharmacists and trainees whom Bowles hired for full- or part-time jobs at Baptist Memorial Hospital. She said Bowles remained a close friend and a valued source of professional advice throughout his life — a comment echoed by many others who knew him.

“Throughout the state of Tennessee today there are people with fond memories of Grover Bowles simply because they remember working for this man as a student. And I think any of them would tell you the same thing — he always showed interest in their career, gave them support, gave them encouragement,” said Max D. Ray, Dean Emeritus at the Western University of Health Sciences College of Pharmacy in Pomona, California.

Ray first met Bowles in 1963 while completing a pharmacy residency at Methodist Hospital in Nashville and a Master’s degree at the University of Tennessee in Nashville, where Bowles taught a hospital pharmacy management course. He served as Ray’s preceptor and became a lifelong friend.

Ray said one of the most important efforts Bowles made on young pharmacists’ behalf was to introduce them to leaders in the world of hospital pharmacy.

“Grover was never identified with some of the things that came later, such as clinical pharmacy. He never even really was a big name in drug distribution systems. But he always had a sense for what the new directions were, and he wanted to make sure that we all were connected with them. So he steered us all in the right direction,” Ray said.

Bowles was born February 15, 1920, in Piedmont, Missouri, a small town in the Ozarks. His mother was a nurse and his father a traveling shoe salesman, according to a 2009 videotaped interview of Bowles for the University of Tennessee College of Pharmacy.

Bowles worked at the town pharmacy as a soda jerk during high school before pursuing a pharmacy degree; his goal was to one day manage a small-town pharmacy. He received a B.S. degree in pharmacy from the University of Tennessee in Memphis in 1942 and then served four years as a pharmacist with the U.S. Navy Hospital Corps.

While in the Navy, Bowles was stationed at Duke University Hospital in Durham, North Carolina, where he was exposed to hospital pharmacy practice under the tutelage of pharmacy chief I. Thomas Reamer.

“It was one of the most fortunate moves I made,” Bowles said in the 2009 interview. Through that connection, Bowles met Harvey A.K. Whitney and other pioneers in hospital pharmacy practice.

Those influences led Bowles to become a national leader in hospital pharmacy and a strong advocate for ensuring the profession’s place as a necessary provider of essential healthcare services.

Oddis recalled Bowles as “a very practical kind of fellow who worked very hard and was generous in his acceptance of the work of other people.”

After leaving the Navy, Bowles spent two years at the University of Michigan Hospital in Ann Arbor as a pharmacy intern — the equivalent of a pharmacy resident today. The department at the time was led by hospital pharmacy luminaries George L. Phillips and Donald E. Francke, and it was there that Bowles met his fellow intern and future wife, Mary Lois Van Inwagen. The two were married December 23, 1947.

For the next five years, Bowles served as Chief Pharmacist at Strong Memorial Hospital in Rochester, New York, an environment where pharmacists interacted closely with the hospital’s physicians. His work at the hospital led to his appointment to a faculty position in pharmacology at the University of Rochester School of Medicine and Dentistry.

Bowles became ASHP’s ninth president in 1952. At that time, he said in the 2009 interview, one of the biggest problems facing the organization was the need to convince administrators at small hospitals to establish inpatient pharmacy services instead of obtaining their medications from local retail pharmacies.

Bowles also suggested that ASHP develop annual awards to recognize practitioners who make significant contributions to hospital pharmacy. Today, ASHP offers more than a dozen national awards, including the Harvey A. K. Whitney Lecture Award, which was established in 1950 by the Michigan Society of Hospital Pharmacists and is considered the highest honor in health-system pharmacy.

Bowles was the 1962 recipient of Harvey A. K. Whitney Lecture Award.

He left New York for Washington, D.C., and West Virginia in 1954 to serve two years as Associate Administrator for the United Mine Workers of America as it built a hospital network now known as Appalachian Regional Healthcare.

In 1955, Bowles returned to Memphis to transform the five-person pharmacy department at Baptist Memorial Hospital as part of the already large hospital’s expansion of its physical presence and services.

Bowles ushered in an era of modern hospital pharmacy experiences for a generation of young pharmacists and students who worked and trained at Baptist Memorial.

Jimmy R. Mitchell, who retired in 2010 as Director of the Health Resources and Services Administration’s Office of Pharmacy Affairs, recalled working for Bowles in about 1965 as his first-ever pharmacy resident.

“At the time,” Mitchell said, “the whole concept of clinical pharmacy was kind of foreign. But we counseled patients. We worked intimately with other departments within the hospital.”

Mitchell described Bowles as a gentleman, a person of integrity, and a strong leader.

“He motivated those around him to achieve excellence,” Mitchell said. “He had a vision of pharmacy as an integral participant in patient care and a highly honorable profession, and he communicated that.”

Another pharmacist with fond memories of Bowles is Jim Ainsworth, who first met Bowles during a March 1969 job interview at Baptist Memorial Hospital. Ainsworth remained at the hospital for many years, serving as Pharmacy Director in 1991 and becoming Chief Executive Officer in 1996.

He said the most important thing Bowles taught him was to have a passion for serving people both professionally and in private life.

“I think that he had his priorities of life in order. His spiritual life, his family life, the passion for the discipline of pharmacy and the job that he had,” Ainsworth said. “He was a very ... good role model to follow.”

Bowles was active at all levels of pharmacy during his tenure at Baptist Memorial Hospital and remained involved after his retirement in 1984. He served as President of the Tennessee Society of Hospital Pharmacists in 1956 and was President of the Memphis and Shelby County Pharmaceutical Society in 1958.

At the national level, he served as President of the American Pharmaceutical Association in 1965–66 and, at the end of his term, he became the organization’s Treasurer for a decade. Bowles received the association’s highest accolade, the Remington Honor Medal, in 1973.

William Evans, Pharmacogenomics Chair at St. Jude Children’s Research Hospital in Memphis, said he was part of a small group of student pharmacists who were invited to Baptist Memorial Hospital to meet

Bowles shortly after he won the Remington Honor Medal.

“It was a larger-than-life moment that I vividly remember to this day. He welcomed us to his office and made us feel comfortable, as if we were having a fireside chat in his home,” Evans said. “He invited our questions and made them seem important as he responded to each, exciting us about the many opportunities that awaited us in the profession of pharmacy.”

Bowles became a member of the American Council on Pharmaceutical Education (ACPE) in 1978 and started a four-year term as the organization’s President in 1982. During Bowles’s time with ACPE, it began accrediting continuing-education programs and deliberated the implementation of the Pharm.D. degree as the sole professional practice degree for U.S. pharmacists. In the 2009 interview, Bowles called his work with ACPE the capstone of his career.

Bowles maintained a role as an educator for the University of Tennessee College of Pharmacy for decades, starting as an Instructor in 1948 and later being promoted to Associate Professor and full Professor. He was named Professor Emeritus in 1993.

He was appointed to the board of directors of the Baptist Memorial College of Health Sciences in 1995 and served in that role for fifteen years. In 2007, Bowles became a member of the board of directors for Trezevant Episcopal Home in Memphis. The facility held visitation and memorial services for Bowles on July 1.

Bowles is survived by Mary Lois, his wife of 72 years; daughters Becky Hinton and Debbie Crom; 3 grandchildren; and 1 great grandchild.