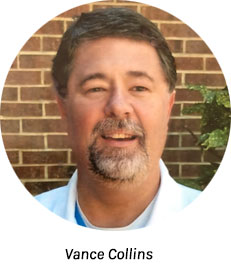 “We’ve been through this so many times now, I think we pretty much know what’s going to happen,” he said. “Our focus during the whole time is on patient care.”

The hospital discharged stable patients ahead of the storm and assembled patient care teams to ride out the event. Collins said the pharmacy team consisted of two pharmacists who worked solo during the emergency, alternating 12-hour shifts.

The storm made landfall on Cape Hatteras September 6 as a Category 1 hurricane with dangerous flooding and strong winds, according to the National Hurricane Center.

Outer Banks Hospital announced the closing of its outpatient clinics as the storm approached, but the emergency room [ER] was open throughout the event.

“We do have ER patients coming in during and after a storm. The volume is not as high as what we would traditionally see on normal days. But they still come in,” Collins said.

Outer Banks Hospital opened in 2002 and serves residents and seasonal visitors to the Outer Banks, a 130-mile stretch of barrier islands off the North Carolina coast. The hospital operates outpatient clinics spread more than 50 miles along the narrow island chain.

Collins said the hospital identified Hurricane Dorian as a potential threat about a week before the storm hit and started preparing for it.

He said the pharmacy team ordered a week’s worth of medications to last during and immediately after the storm, in case the hospital was “cut off from the world” by flooding.

Pharmacy staff also called local pharmacies to find out if they expected to remain open during the emergency. Usually, Collins said, there’s at least one day during a big weather event when all pharmacies in the area are closed and hospital patients can’t get discharge prescriptions filled.

“So we worked with our ER medical director to prepare some take-home packs for those patients to last them until the local pharmacies reopened,” he said.

Other preparedness tasks included moving medications from outpatient clinics to the better-equipped hospital.

“All of the clinics have refrigerated medications that need to be stored during the hurricane,” Collins explained. “So we have to make sure we have enough refrigerated space [at the hospital] to be able to handle those during the storm.”

Dare County, which includes Nags Head, issued a mandatory evacuation order for visitors starting September 3 and for residents starting the next day. Collins said the hospital’s storm planning includes ensuring that staff who evacuated can return to work.

“We want to make sure all of our [critical] personnel ... have the appropriate reentry permit so once the storm has passed, they can get back on the island,” he said.

He noted that some area residents always refuse to evacuate, and the hospital is always ready to care for them if needed.

“We have had instances where those medications, which are sometimes refrigerated, will sit in a distribution site for three or four or even more days. And of course, they’re no good at that point in time, so they have to be sent back to wherever they came from and sent to us again,” he said.

More than two weeks after the storm’s departure, debris collection remained underway in the area.

“But everybody is totally safe,” he said.