By reimagining its internship program, University of Colorado Hospital (UCH) in Aurora has created advanced roles for student pharmacists and allowed the pharmacy department to provide new services. 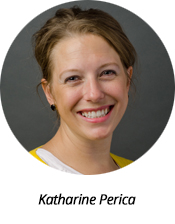 Among other things, the interns have helped to establish and maintain a robust “meds-to-beds” program, said Pharmacy Transitions of Care Manager Katharine Perica. Through this service, the outpatient pharmacy fills discharge prescriptions and has the medications delivered to the patient’s room.

“The interns are staffing ‘meds to beds’ seven days a week. It has been really awesome for us to be able to say that we have a pharmacy service that’s not just Monday through Friday,” Perica said. 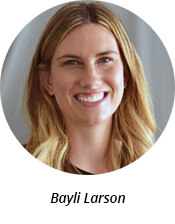 Former intern Bayli Larson — now serving as ASHP’s executive fellow in association leadership and management — was at UCH during the rollout of the transitions-of-care pharmacy service. She teamed with a pharmacy resident to manage the service weeknights from 4:00 to 8:00 p.m.

During the day, the transitions-of-care pharmacist compiled a list of patients for Larson and the resident to enroll in the service.

She also phoned patients after discharge to check on them and to confirm that they had picked up their prescribed medications and made any recommended follow-up appointments.

As an intern, Larson also performed medication reconciliation in the emergency department on weekends. Perica said this boosted the pharmacy department’s capacity to provide the service.

And, noted Larson, “it worked for our schedule, so we could get in a full eight-hour shift instead of just coming in for a few hours after class.” 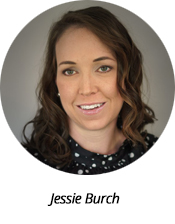 The current centralized internship model has been in place for four years. Perica said she and fellow clinical coordinator Jessie Burch developed the model because the old system, with each unit managing its own internships, left gaps in staffing and resulted in a narrow experience for the interns.

“We previously had only three interns on staff, and that was not enough to really create any sort of continuity with a service,” Perica said.

The current model was built on the calculation that each intern would work an average of 12 hours per week while classes were in session and 32 hours per week during the summer break. Perica said the program now supports a dozen interns.

“I would really encourage people who have the bandwidth to be able to set up a program like this to jump in and do it,” Perica said.

The interns perform traditional tasks, such as working with the medication reconciliation team to collect medication histories. Perica said this gives interns tremendous opportunities to interact directly with patients.

“In the medication history role, they are seeing probably an average of 8 to 12 patients per day, where they’re doing direct patient interviews,” Perica said. She noted that the experience helps interns master essential interview skills early in their pharmacy education.

The interns also process prior authorization requests. Perica said this has greatly enhanced the outpatient pharmacy’s capacity to manage prior authorizations for patients who are being discharged and need a quick turnaround for their prescriptions.

“Because of the interns, we’ve been able to help make a service that is sustained even in the evenings after the normal staff are gone,” she said. “For discharge prescriptions, most of the time the physicians on the floors never even find out the drug needed a prior authorization — that’s how seamless the process is.”

The interns also play a vital role in managing herpes zoster vaccine clinics. Perica noted that this is a challenging task because of the ongoing national shortage of the vaccine, which is given in two doses 2–6 months apart.

She said the interns manage a list of more than 900 patients, scheduling the initial dose and calling back patients when the second dose is due.

Interns in their second, third, or fourth year of school are certified to vaccinate, and they administer the vaccine during the clinics, Perica noted. First-year students who aren’t yet certified can do just about everything else to manage the clinics, including preparing the vaccine for administration, if needed.

Perica said she thinks it’s unusual for student pharmacists to have the degree of independence that the internship provides.

“For the most part, they are trusted to be autonomous and high performers, because they work in so many different areas where I cannot be physically present,” she said.

The interns are paid biweekly and are categorized as flex employees of the health system.

Perica acknowledged that the internship experience can seem overwhelming at first. But she said the students soon “get in the swing of things” and come to enjoy the work and the benefits it brings to their education.

Fourth-year student Mary Reilly, who is in her second year of the internship, said her advice to new interns is “to keep an open mind and work hard.”

Reilly applied for the position because she wanted to work in a hospital and interact with patients. She said she enjoys working independently and alongside pharmacy residents, nurses, and physicians.

Reilly said her most rewarding experiences include solving insurance problems for patients when they face upsetting delays getting their prescriptions filled.

“Just being able to help patients is such a wonderful experience,” she said. “It’s always nice ... when it works out and we’re able to get them what they need.”