As system medication safety pharmacist for BJC HealthCare in St. Louis, Missouri, Paul Milligan normally works behind the scenes instead of directly caring for patients.

But when he was asked to help with the March 18 launch of the health system’s first drive-up COVID-19 test site, Milligan found himself on the front lines of patient care.

Within days, he was helping to manage the testing program. 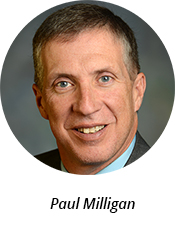 “This situation is all hands on deck for all pharmacists,” Milligan said last week. “Many of us are doing permanent-temporary jobs.”

Some of these new duties, he said, are related to supply management, guideline development, personal protective equipment (PPE) preservation, and revising policies and procedures to reflect the current situation.

During his first day at the drive-up test site, Milligan discovered that since he was a clinician, he would undergo training to perform nasopharyngeal swabs in patients who had been referred to the clinic for COVID-19 testing.

Milligan said he and three nurses were trained in how to administer the tests and practiced their technique on a dummy supplied by the nursing school.

“The training was really good. We had nurses that had done it. They told us where to feel, and what we were going to feel, and the angle to approach,” he said.

The testing team members also had to demonstrate proficiency donning and doffing PPE.

Milligan estimated the training and PPE verification process took about 30 minutes. Soon afterward, he said, “we were testing employees and the public ... in a parking lot in a trailer, with a tent to protect us from the elements.”

The next day, Milligan trained new staff and used what he called his “pharmacy organization skills” to help manage issues that arose at the site.

“Then they asked me to be one of the site coordinators,” he said. That placed him back in an office environment part-time — albeit in the tent — while continuing to collect nasopharyngeal samples as needed.

The site dealt with minor and major operational problems during its first days.

“We’ve had everything — snow, rain, sleet, hail, lightning, power outage,” he said. “We had to shut down for lightning one time because it was in the area, so we all went into a building for about an hour.”

During his second day as site coordinator, Milligan found on arrival that the tent “had blown down and was mangled in the corner — this gigantic, football-field sized tent, laying down.”

The replacement tent is built to withstand 100-mph winds.

“They have spared no expense,” Milligan said. “We’re always staffed well and we have had a new tent and everything to protect us.”

Candidates for testing under the state’s most recent criteria include hospitalized patients with fever, acute respiratory illness, or other signs and symptoms of COVID-19 infection; seniors and people with chronic medical conditions who are symptomatic and reside in group living facilities; and healthcare providers and others who are symptomatic after close contact with a confirmed case or someone whose COVID-19 test result is pending.

Milligan said screening occurs over the phone and through telehealth and other venues. The drive-up test site isn’t involved in the screening process.

“By the time they show up here, they have already passed all those screenings and we have kind of a clean order to go ahead and test them,” he said.

Milligan said the drive-up team provides both education and testing to patients, but he said the process is quick.

“It takes us about four minutes to get somebody done and out and driven through,” he said. “We’re able to process probably a couple hundred patients a day if they were all lined up.”

The clinic operates 8 a.m. to 4 p.m. Monday through Friday and 8 a.m. to noon on weekends. But Milligan said the team reopened the site one evening for a behavioral health patient whose father had driven him to the clinic after hours.

“They would have had to drive over an hour home and drive back the next day. And we want to get the results to them quickly,” Milligan said.

He said one of his managerial roles is to make sure the testing team members don’t get anxious and rush the process when several vehicles are lined up awaiting tests.

“These are not ‘stat’,” he said. “Sometimes I’ll hear that there’s six cars in line, and I go out there and say, with two teams, these cars will be done in eight minutes.”

Milligan and his teammates realized early on that they needed a pediatric nurse onsite to test children, so one was added to the group. He said process improvement personnel have been onsite to monitor and log the clinic’s procedures so they can be replicated at additional drive-up test sites.

“And we’ve had our director of infection prevention out on the site to watch our process to make sure that we are protected,” he said. In addition, he said, the health system has discussions about staff well-being “to make sure that they’re taking care of themselves, that nobody’s working too many hours.”

He said the testing site has a daily morning “huddle” to make sure the staff feel safe. At closing time, he said, the team members are asked: “Is there any time you didn’t feel safe today?”

Milligan said this week that he is working about half-time at the drive-up site. The rest of the time he works with other pharmacy leaders on surge planning.

“The best part about this experience has been that all of us here at BJC are doing everything we can to help each other and support each other,” he said.

He called his recent clinical duties challenging but also rewarding and said he and the nurses receive a lot of appreciative remarks from patients and colleagues.

“I’ve had more compliments on the job I’m doing as a pharmacist and a healthcare professional in the last 10 days than a long time,” he said.

Milligan said COVID-19 has spurred cooperation among pharmacists across the country.

He called out the members of ASHP’s Medication Safety Section Advisory Group, which recently convened an hour-long call to talk about what works and what hasn’t been successful in responding to the pandemic. He said he was able to share the group’s wisdom with his hospital colleagues to head off potential issues that hadn’t yet been considered.

“We’re at a point where we need to get it right the first time,” he said.

For more information and free tools regarding the pandemic, including a recently released Assessment of Evidence for COVID-19-Related Treatments, visit ASHP’s COVID-19 Resource Center and the new COVID-19 Community at ASHP Connect.