In a nod to the upbeat spirit for which the New Orleans area is famous, Ochsner Health ended March with Vax Fest, a 24-hour COVID-19 mass vaccination drive-through event in Metarie featuring live music, great local food, and a festival flair.

The health system announced that nearly 5,000 people received a dose of Moderna Inc.’s investigational COVID-19 vaccine during the event, which started at 10 a.m. March 29 and continued until the next morning. It was billed as the biggest COVID-19 vaccination event in the state. A time-lapse video from the health system captures the traffic at the site throughout the event.

Myra Thomas, assistant vice president for pharmacy at Ochsner Medical Center in New Orleans, said the event offered a glimpse of normalcy for a community whose notable celebrations have been curtailed by the pandemic.

“People were getting out of cars and dancing,” said Thomas, who worked two shifts as pharmacy lead for the event. “When there wasn’t live music, there was a D.J. ... The staff were dancing and having a good time, and that was a lot of fun.”

Adding to the festivity were appearances by mascots for the New Orleans Saints and Pelicans and the health system’s own mascot, Ollie Oschsner. Drago’s Seafood Restaurant served its trademark charbroiled oysters throughout the event, and area legend Tastee Donuts was onsite to feed the morning crew (or Krewe, in local parlance).

Thomas said the crowd thinned during the early-morning hours, and the health system may hold future clinics over two days instead of repeating the around-the-clock format.

The marathon event was originally to take place a week earlier as what Thomas called a “24 on the 24th” clinic, but severe weather led to a week’s postponement. That change was likely a boon for the event, because Louisiana Gov. John Bel Edwards expanded COVID-19 vaccine eligibility to everyone in the state 16 years or older, effective March 29.

“It just opened everything up and allowed everybody who’s interested to come,” Thomas said.

As pharmacy team lead, Thomas was responsible for transporting the vaccines from their secured storage site to the clinic area. She said the health system takes vaccine security very seriously.

“It’s only pharmacy managers and up who can get to the vaccine. And so I transport it along with a member of the security team,” Thomas said.

She said pharmacy staff prepared and drew up batches of 11 or 12 doses, placed them in plastic bags with labels for the patients’ vaccination cards, and delivered the bags to the staging area at the clinic site. The pharmacy team lead verified the bag contents and lot numbers before releasing the doses for administration.

She said keeping track of lot numbers was one of the pharmacy team lead’s critical responsibilities. 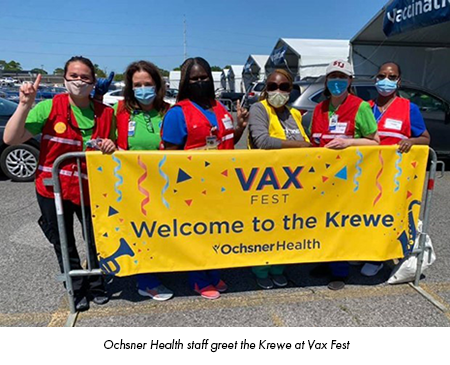 “We’re kind of the point of control on the doses getting out to the administration station,” Thomas said. “Whenever we have lot number changes, we ... verify that the nursing team has cleared that station, there are no little labels hanging around, all of the vaccine doses from the previous lot have been administered.”

The health system encouraged but did not require Vax Fest attendees to make an appointment to get vaccinated.

“If we can get an appointment, we can get them in the system, [and] it speeds up the registration process,” Thomas said. She noted that the health system’s “Fastpass” system for vaccination clinics allows people who register in advance to download a bar code that gives access to an expedited line.

But she said the benefits of preregistration must be weighed against the potential to boost overall vaccination rates by allowing anyone to come without an appointment. Thomas said the health system is exploring ideas for streamlining the process for everyone.

“The last thing in the world we want is people having to wait for hours to get vaccinated,” she said.

She also said the health system has found over the past few months that appointment scheduling is a guessing game.

“It’s just really tough to fully plan. Because people may be scheduled — and I think for [Vax Fest], we were scheduling 28 patients every five minutes. But people come early, they come late. And so it’s a best guesstimate” how the day will go, she said. 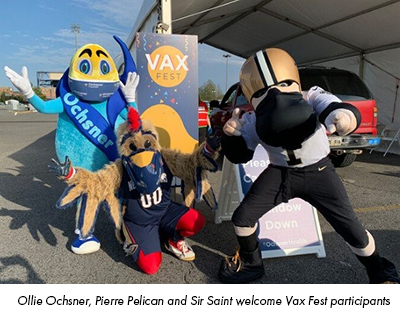 Thomas said the New Orleans area has been largely receptive to COVID-19 vaccination after suffering as a national hot spot early in the pandemic.

New Orleans was home to the first confirmed case in the state, which was announced March 9, 2020. The state had reported more than 450,000 cases through April 15, with Jefferson Parish, which includes New Orleans, accounting for about 10% of that total.

“We’re looking for opportunities to partner with businesses so that we can do whatever we have to do to try to get folks in the door, get them vaccinated, and hopefully begin to put a stop to this pandemic,” she said.

For more information and free tools regarding the pandemic, including the Assessment of Evidence for COVID-19-Related Treatments and patient-level COVID-19 vaccine monographs in English and Spanish., visit ASHP’s COVID-19 Resource Center and the COVID-19 Community at ASHP Connect.