Pharmacists are moving forward on provider status legislation at the state level as the profession looks toward the ultimate goal of recognition as healthcare providers under Medicare Part B.

In Nevada and Colorado, relevant legislative action involves the broadening of collaborative practice agreements (CPAs) alongside new mandates for payers to reimburse pharmacists for their protocol-based services. 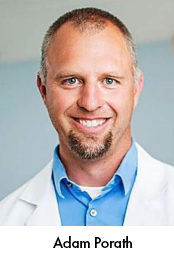 The 2021 legislative year “was probably, in my career, the most historical legislative session as far as the advancement of pharmacy practice,” said Adam Porath, vice president of pharmacy at Renown Health in Reno, Nev., and director-at-large for legislative issues at the Nevada Society of Health-System Pharmacists (NVSHP).

Under this law, physicians no longer need to sign individual agreements for each collaborative arrangement with a pharmacist or work for the same organization as the pharmacist.

“The language has been changed to allow for a pharmacist to engage in a collaborative practice relationship with a physician and be able to accept referrals from any other provider,” Porath said. “Those other providers don’t have to have physically sign on to the collaborative practice. So it really expands a pharmacist’s ability to comanage patients.”

Another big change is that pharmacists can manage controlled substances through collaborative practice agreements — a responsibility that was previously prohibited by state law.

“It opens the door for pain management practices, things that we’ve never really been able to do before as a pharmacist through a CPA. So it’s pretty exciting,” Porath said. “With [all of] these changes, the sky is really the limit. Whatever the collaborating provider and the pharmacist are comfortable doing, and it’s within their scopes, it’s now allowed.”

The new law requires public and private health plans to reimburse pharmacists for clinical services associated with the furnishing of PrEP and PEP. Porath said the legislation is also notable because “it’s the first time in Nevada law that the word ‘prescribe’ has been associated with a pharmacist.”

Colorado House Bill 1275, which was signed into law in June, requires the state’s Medicaid program to reimburse pharmacists for their medically necessary clinical services. The statutory language recognizes that pharmacists can provide essential services and fill gaps in primary care and acknowledges that the profession’s services are unsustainable without a funding mechanism.

“That’s where we’d get frustrated,” Zadvorny said. “We can do a lot of things per our scope, but we can’t get paid for it, so nobody does it.”

The new law fixes that problem with an appropriation of $1.7 million for implementation during the 2021–22 fiscal year.

“Up until this point, any community pharmacy could offer those services and independently prescribe those medications for any of those three protocols. But they weren’t reimbursable,” she noted.

Zadvorny said Colorado’s legislature has been inching its way toward provider status for about five years, starting with a law suggesting that commercial payers reimburse pharmacists for services performed under a collaborative practice arrangement.

“But we couldn’t get a mandatory word in there; it was ‘may reimburse,’” she recalled. The mandate for payment in the commercial market came a few years later and paved the way for this year’s Medicaid payment requirement.

Zadvorny said that although state-level progress toward provider status has been incremental, each step solidifies and normalizes the idea that pharmacists are truly healthcare providers.

“We have had very, very little pushback, if any, on the premise of provider status, or at least with the premise of pharmacists being reimbursable providers,” she said. The big hurdle this time, she said, was securing state Medicaid funding to implement the payment expansion.

Porath said a similar stepwise process played out in Nevada. Just a few years ago, he said, the physician lobby had strongly opposed collaborative practice expansion.

Nowadays, he said, physicians support CPAs and even “testify as to the benefits to their patients about being involved with a pharmacist in a collaborative practice.”

Porath noted that Nevada’s legislature meets every other year. He described NVSHP’s advocacy work as “a mad dash for 120 days to try and get everything done.”

He said the advocacy process can be intimidating at first for pharmacists. But once they get involved, they soon realize that “legislators are normal people ... and they really just want to do what’s best for the citizens of the state.”

He said that sets the stage for pharmacists to make compelling arguments to legislators about how collaborative practice and provider status expand access to care statewide.

Zadvorny said Colorado’s legislators want to see data on the return on investment in pharmacy services, how the services work, and what benefits they bring to the healthcare system. She encouraged pharmacists in the state to advocate for the profession.

“You really can make a difference by just one voice,” she said. “I’ve seen, many times, a pharmacist come down to our legislature and tell a story and relay a patient scenario that they helped with or they fixed. And it makes a huge impact.”

She also emphasized that advocacy at the state level builds momentum for Congress to take action on provider status.

“I am optimistic that pharmacists will get recognized at a federal level in some manner,” she said. “I do feel like the momentum is changing.”

“We believe these accomplishments will further bolster our continued efforts to urge the federal government to follow the example of states like Nevada and Colorado and fully recognize the value of pharmacist providers,” he added.

Visit ASHP’s website to learn what the organization is doing to support provider status and to help pharmacists get involved in the effort.