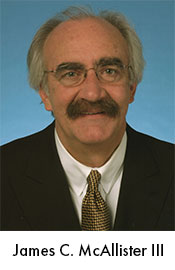 James Charles McAllister III, educator, past president of ASHP, and lifelong voice for advancing the practice of pharmacy, died December 20, 2021. He was 73 years old.

McAllister was ASHP president in 1990–1991. He was active in the organization for more than 30 years, including service on councils and the Board of Directors. He was named a Fellow of ASHP in 1993 and was the 2003 recipient of the ASHP Harvey A.K. Whitney Lecture Award.

“We were deeply saddened to learn of Jim’s passing,” said ASHP Chief Executive Officer Paul W. Abramowitz. “In his 2003 Harvey A.K. Whitney lecture, Jim asked ‘What will be your legacy?’ During his long career in health-system pharmacy, Jim established his own legacy as a visionary leader who advanced pharmacy practice, including intravenous admixture services, home health care, pharmacy informatics, and professional education and residency training. His service to ASHP, including as president, contributed to advances in the profession that continue to this day. I was fortunate to have served on the ASHP Board of Directors when Jim was president and have valued his friendship ever since. Patient care, the profession, and ASHP members were his highest priorities as he led the organization. I send my deepest condolences to his wife Anita Groves McAllister and entire family at this very sad time.”

McAllister’s son, James C. McAllister IV, said his father “gave everything to the profession of pharmacy, oftentimes making sacrifices in his personal life.”

“While he held numerous titles, earned countless accolades, and served as a catalyst for many tangible advances in the profession, none of this is what drove him. Dad’s motivation was people,” McAllister said. “We are saddened that his booming voice and infectious laugh will no longer be heard, but we find comfort knowing it will echo through this profession for generations to come simply by the sheer number of people Pop helped.” 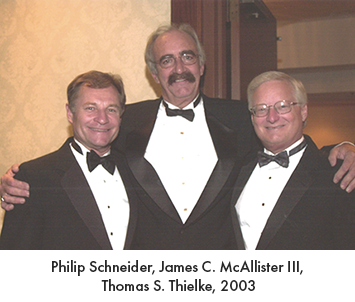 The elder McAllister, together with ASHP past presidents Philip Schneider and Thomas S. Thielke, were well-known in the pharmacy world as the “Three Amigos,” a bond formed over many years of shared experiences.

“Our fellowship was strong and nurtured by an important concept: ‘friendship.’ It was a friendship that started with our service on the ASHP Councils in the late 1970s, nurtured as ASHP presidential officers, trips to International Pharmaceutical Federation meetings, and continued with regular phone calls until his recent passing,” Schneider and Thielke said. “Part of his legacy was the importance of friendship through thick and thin.”

McAllister shared the importance of the friendship during his 2003 Whitney Lecture, saying, “If you search your heart for what ‘best friends’ means, you will understand what Tom and Phil are to me.”

“I am a better person because Jim McAllister came into my life,” said Fred M. Eckel, founder of UNC Medical Center’s pharmacy residency programs. “Although I was his teacher and mentor, he often taught me and gave me guidance. He was respectful always, but his kindness seemed to emerge when it helped the most.”

Eckel said his own son is among the many young pharmacists who benefited from McAllister’s guidance and kindness.

“Jim was my student. My son Stephen was Jim’s student and resident. Stephen is now a teacher and residency director,” Eckel said. “My respect for Jim grew as I saw how he helped Stephen grow professionally and personally.”

McAllister’s professional career included 28 years at Duke University Health System, where he served as pharmacy director and associate chief operating officer. He then spent nine years at UNC, serving as director of pharmacy for UNC Hospitals & Clinics and associate dean for clinical affairs and clinical professor at the UNC School of Pharmacy.

John Valgus, director of pharmacy at UNC Medical Center, said McAllister was a mentor and friend. Valgus said he is a better pharmacist, husband, and father, thanks to McAllister’s guidance over the years.

“I was part of the first residency class that Jim recruited when he came back to UNC,” Valgus said. “For many of us he was the type of mentor who would invite you into his home and cook you an amazing meal, he would attend your wedding, he would show up at your home to congratulate you on the birth of a child, and he would brag about you at any opportunity he could.”

Desi Kotis, associate dean and chief pharmacy executive at the University of California, San Francisco, School of Pharmacy, said McAllister was a gentle giant and true gentleman who loved his family. He was also a professional who pushed for innovation and creativity in pharmacy.

"He would make me think about many possibilities," Kotis said. "He [came] to Chicago about six years ago as a sponsored ASHP visiting leader. Jim was prepared to talk with the residents on what they can expect as they practice in the future."

McAllister retired from UNC in 2007 and founded and led two pharmacy consulting companies. He reentered academia in 2011, serving for two years as clinical professor and regional experiential program coordinator at the University of Florida College of Pharmacy in Ft. Myers.

During his many years as a pharmacy practitioner in North Carolina, McAllister served terms as president and member of the Board of Directors of the North Carolina Association of Pharmacists.

He also served six years as representative to the Joint Commission on Accreditation of Healthcare Organizations (now The Joint Commission) and as a member of the American Foundation for Pharmaceutical Education Board of Directors.

He was also a prolific writer and popular speaker, authoring more than 100 articles throughout his career and lecturing at home and abroad.

McAllister was the 2015 recipient of the Milton W. Skolaut Leadership Award, which recognizes exceptional contributions to the pharmacy profession by past residents of the Duke University Hospital pharmacy residency program.