D10: Opportunities for technician specialization should be developed

With this project in place, nurses would take all patient medication histories initially upon admis- sion. Once the medication list of the patient was established, a specially trained pharmacy techni- cian or intern would review it and check for com- pleteness and accuracy. They would then compare that list with the medications ordered by the physician to continue necessary home medica- tions. Upon review, they would make recommen- dations to medical providers to re-order critical medications that were missed.

When a change needed to be made that was identified by the technicians or the interns, the pharmacist would check it and either leave a note in the chart or call the physician. Then, an assess- ment was made of which physician group (hospi- talists, specialists or surgeons) was most accepting of medication reconciliation-related recommendations.

IT and other infrastructure: Medication reconcili- ation was performed using a specific form with space for the medication name, dose, direction, the source of the information, and who collected it. This form eventually evolved into an order form that allowed the prescriber to check a box stating if they wanted to continue or discontinue a medication. This required an additional “adden- dum” form that allowed updating the medication history because the original one was now a physi- cian order that could not be altered by the techni- cian or intern.
Supply expense: As this initiative grew, more technician hours were added, and a raise was given to technicians who added on this responsi- bility. However, the significance of the cost is cur- rently unknown.
Return on investment: A review of the program was conducted two years after its start. Just over 1,240 patients who received medication reconcilia- tion services during the study period had at least one “critical medication” in their current medica- tion history. Although the majority of patients (89.3 percent) did not require interventions, phar- macists made 178 interventions on 132 patients.
Ten percent of patients needed medication rec- ommendations; out of those, 57 percent of rec- ommendations were accepted by the ordering physician. Clearly, the percentage indicates that potential errors were avoided. The most common medications for which pharmacists made recom- mendations (primarily, anticonvulsants, antide- pressants, thyroid medications, and vitamin K antagonists) were recorded. Another benefit of this program was the additional time it freed up for nurses and physicians to engage in other patient-care activities.

Because of pharmacists’ knowledge base and extensive training, medication reconciliation should be a pharmacy-driven process. Utilizing highly trained pharmacy technicians and student interns to assist in this process is a smart use of health-system resources. The success of the pro- gram at Lincoln Hospital was evidenced by the fact that, since its inception, two other techni- cians have been added to the staff rolls. They have been trained on the critical medications, common doses, what errors to look for, and the ability to ask patients open-ended questions.

Suggestions for Other Hospitals/Health Systems

Deploying pharmacy technicians on a project like this is a great utilization of existing resources.

They have knowledge and are able to get trained on the necessary tools needed to conduct these medication reconciliations. The technicians in our pharmacy who were approached to participate were very excited about going out and seeing patients and working on this project.

Technicians were trained to recognize the critical medications as well as the dosage range. The technicians also received training on how to inter- view a patient, ask open-ended questions, and how to gather information from a patient’s chart. Student interns received most of this training dur- ing their first year of pharmacy school, and they did not start with the medication reconciliation program until the second year. The pharmacy director shadowed each technician and intern to verify their skills before they were allowed to function independently.

The technicians in this program were highly moti- vated, independent individuals with a history of developing or helping out with major projects.
Another “incentive” was a set Monday to Friday schedule, with interns providing weekend cover- age for the majority of the time. 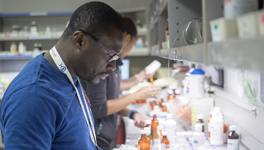 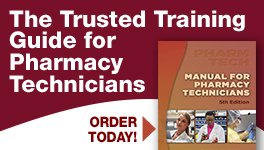