This podcast describes the role and journey of several African-American women pharmacy leaders and the social and political environment affecting the opportunities for these practitioners. It also explores the role of pharmacy education in improving diversity and inclusiveness in the workforce as well as the ongoing issue of health disparities and opportunities to address the problem.

Marie A. Chisholm-Burns, PharmD, MPH, MBA, FCCP, FASHP, FAST, is Dean and Professor of the University of Tennessee Health Science Center College of Pharmacy and Professor of Surgery in the College of Medicine. She previously served as Professor and Head of the Department of Pharmacy Practice and Science at the University of Arizona College of Pharmacy, with joint appointments as Professor in the Department of Surgery and the Division of Health Promotion Sciences. Dr. Chisholm-Burns received her BS in Psychology and General Studies (Emphasis in Biology) from Georgia College, BS in Pharmacy and Doctor of Pharmacy degrees from the University of Georgia, Master of Public Health from Emory University, and Master of Business Administration from the University of Memphis. She completed her residency at Mercer University Southern School of Pharmacy and at Piedmont Hospital in Atlanta, Georgia. Dr. Chisholm-Burns is Founder and Director of the Medication Access Program which increases medication access to transplant recipients. She has also served in numerous elected leadership positions in several different professional organizations, has worked in multiple pharmacy settings, is a board member of the Accreditation Council for Pharmacy Education, and is a member of the National Academies of Practice. She serves as a member of government organizations, such as the Food and Drug Administration.

With more than 340 publications and over $17 million in external funding as principal investigator and co-investigator from organizations such as the National Institutes of Health and several foundations, she is a prolific scholar. She has published several textbooks that have been adopted in many schools of pharmacy, medicine, and nursing. In 2008 and 2011, textbooks co-edited by Dr. Chisholm-Burns, Pharmacotherapy Principles and Practice and Pharmacy Management, Leadership, Marketing, and Finance, respectively, received the Medical Book Award from the American Medical Writers Association.

John E. Clark, Pharm.D., M.S., FASHP, is Assistant Professor in the Department of Pharmacotherapeutics and Clinical Research and Director of Experiential Education and Pharmacy Residency Programs at the University of South Florida (USF) College of Pharmacy in Tampa.

Clark is also a Clinical Pharmacist and Faculty Preceptor in Ambulatory Care at the USF Morsani Health Center Building Relationships and Initiatives Dedicated to Gaining Equality (BRIDGE) Healthcare Clinic. The BRIDGE Healthcare Clinic is a student-run, multidisciplinary, non-profit clinic that services uninsured and underinsured patients in the Tampa area. He was instrumental for several years in the planning and implementation of the Association of Black Health-System Pharmacists (ABHP) Minority Health Conference, which explored health literacy, medication adherence, use of health information technology, and medication management of conditions such as diabetes, renal disease, prostate cancer, and HIV/AIDS.

A widely published author and sought-after speaker, Clark’s current projects include a historical review of the contributions of African American women in pharmacy and an analysis of the ways early, and now defunct, African American pharmacy schools impacted health disparities. He is the recipient of the 2019 ASHP-ABHP Joint Leadership Award.

Melanie R. Smith, Pharm.D., BCACP, DPLA is the Director of the ASHP Section of Ambulatory Care Practitioners. In this role, Dr. Smith serves as the staff liaison to the Section of Ambulatory Care Practitioners Executive Committee. She also acts as an ASHP information resource and provides guidance to ASHP members on pharmacy practice in various ambulatory care practice settings.

Dr. Smith received her Bachelor of Science in Biology from the University of North Carolina and her Doctor of Pharmacy from Virginia Commonwealth University. She completed an ASHP-accredited PGY1 residency at the Lexington VA Medical Center in 2008 and obtained her Board Certification in Ambulatory Care in 2011. 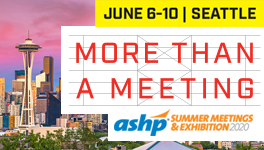