It is important for ASHP members who serve in the House of Delegates to have a thorough understanding of their responsibility for reviewing, amending, and approving the professional policies of ASHP. The ASHP Charter, Bylaws, and Rules of Procedures for the House of Delegates serve as the foundation for the Society’s policy development process.

Other voting delegates include all officers and directors of ASHP, past presidents (if eligible to be active members), the chairs of the executive committees of sections and forums, and the five fraternal delegates representing the United States Army, Navy, Air Force, Public Health Service, and Department of Veterans Affairs.

The formation of ASHP professional policy begins with the member. Members have many opportunities to identify topics for policy development, including at open hearings and Regional Delegate Conferences; through the House of Delegates in the form of Recommendations, Resolutions, and New Business; through affiliated state societies by responding to the call for Resolutions; through topics suggested for the councils or the executive committees of sections and forums; and through discussions with ASHP officers, Board members, and staff. Proposed new professional policies must be approved by the Board of Directors before they are submitted for House of Delegates action.

Responsibilities of Delegates and Alternates

The annual responsibilities of state delegates include (1) developing an understanding of the issues on the House of Delegates agenda; (2) learning the perspectives of ASHP members in the state on those issues; (3) participating in the annual session of the House of Delegates, which consists of two virtual and two live meetings; (4) participating in a Regional Delegate Conference in advance of the June meeting of the House; and (5) reporting back to ASHP members in the state on the outcomes of House meetings. In addition, experienced delegates are expected to mentor new delegates.

Council Meetings. The five councils — Education and Workforce Development, Pharmacy Management, Pharmacy Practice, Public Policy, and Therapeutics — meet three times annually, by conference call in January/February and June, and in person for two days at Policy Week in September. After thoughtful deliberations, each council submits a report with policy recommendations that are acted upon by the Board of Directors. With the advent of the virtual House meetings in the spring and fall, policy recommendations that are deemed urgent or time-sensitive are expedited for a vote by the House utilizing an online voting platform. Policy recommendations approved by the Board for consideration by the House of Delegates are placed on the ASHP website in February for the March virtual meeting of the House, April for the June meeting, and October for the November virtual meeting. Policies approved by the House are then published in AJHP, and the annual proceedings are published on the House of Delegates website.

Section and Forum Executive Committees. New professional policies may also be recommended to the Board of Directors by the executive committees of sections and forums.

Resolutions, Recommendations, and New Business. In November, a Call for Resolutions is sent to affiliated state societies and publicized to all ASHP members. Resolutions require two ASHP active members — not necessarily delegates — as sponsors and must be submitted 90 days in advance of the June House meeting. Recommendations , another avenue for members to identify a topic for further review by ASHP, may be presented at the June House by any delegate. New Business motions may be introduced by any delegate at the second meeting of the June House and require a second. New Business must be submitted in writing by 4:00 p.m. the day before the second meeting and must include appropriate background information. The Board is not able to "duly consider" New Business items before the House considers them. Hence, the House has only two options, namely, referring a New Business item to the Board for review or rejecting the item. The Board reports all action taken on New Business at the next session of the House.

Regional Delegate Conferences. By April, policy recommendations that will be considered at the June House meeting are posted on the ASHP website. In early May, the Regional Delegate Conferences (RDCs) are held, which are designed for delegates and alternate delegates to review upcoming House business with ASHP officers and staff. The RDCs are also a forum for informal discussion of issues related to hospital and health-system pharmacy practice, state society operations, and ASHP activities. State society officers are encouraged to attend RDCs.

The time between the RDCs and the June House provides delegates an opportunity to discuss items on the House agenda with colleagues. Such dialogue gives delegates insight into various points of view on issues, helps ensure well-rounded debate in the House, and allows delegates to collaborate in proposing amendments.

Open Forum for Members. This session serves as both the "Open Hearing of the House of Delegates" and a time for discussion by ASHP members of any matter of concern related to pharmacy practice in hospitals and health systems. The session is held at the Summer Meetings before the first meeting of the House, and discussion is facilitated by the Chair of the House. The Open Forum is an excellent opportunity for practitioners to bring emerging issues to the attention of ASHP leaders.

Participation and Engagement — Onsite and Virtual 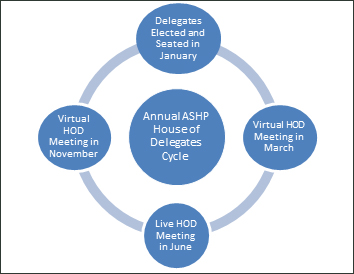 Traditionally, the House of Delegates has met in person during the ASHP Summer Meetings in June, where policy proposals that have been approved by the Board of Directors are debated and voted upon. Beginning in 2015, ASHP included two semi-annual virtual House of Delegates meetings in the annual House of Delegates session. These meetings, in the spring and fall, provide an opportunity for delegates to debate and vote on policy recommendations in a more timely fashion, making the ASHP policy process more responsive. Delegates are expected to serve an entire calendar year — two virtual meetings and two live meetings in June — or work with their state affiliate to arrange for an alternate to serve in their place at any meetings they cannot participate in.

Virtual Meetings. Once elected and credentialed as a delegate or alternate by the state affiliates at the start of each year, participation in the virtual House of Delegates is the first opportunity to impact the ASHP policy development process. An orientation session is conducted by the Chair of the House of Delegates to welcome and familiarize delegates with their year-long responsibilities and, more immediately, to prepare for the upcoming virtual March meeting. All duties associated with the virtual House meetings can be fulfilled with a computer and an internet connection and do not require travel. Only policy recommendations of an urgent or time-sensitive nature are put before the Virtual House of Delegates, and they number three to five recommendations on average.

Caucuses. Delegate caucuses are typically scheduled before the first meeting and between the first and second meetings of the June House. Caucuses are particularly valuable for airing ideas about potential amendments to policies and for refining amending language. Caucuses, which may be requested by delegates or may be arranged by the Chair of the House, are scheduled through the Office of Policy and Planning.

Basic Parliamentary Procedures and Rules of Order. The ASHP Charter, Bylaws, and Rules of Procedure for the House of Delegates, supplemented by the latest edition of Robert’s Rules of Order, govern the proceedings of the House. A professional parliamentarian is appointed to advise the Chair of the House on procedural matters. These procedural issues are covered in an orientation session, the Delegate Primer, conducted by the Chair of the House and the parliamentarian in advance of the first meeting of the June House.

Discussion of Issues by the House of Delegates. All business before the House is open for discussion upon introduction at the specified point in the agenda. (An exception is Recommendations, which are merely introduced and not discussed.) Each Board report on councils is presented by the Board liaison to the council. The policy recommendations in each report are introduced as a block. Delegates may discuss any policy recommendation after the report is introduced. Delegates may request a separate vote on any individual recommendation; such requests are automatically accepted by the Chair unless any delegate objects, in which case a majority of delegates must vote in favor of separate consideration.

Due Consideration of Amendments to Professional Policy Proposals. If the House amends a professional policy proposal presented to it by the Board, the Board must reconsider the matter before it becomes official policy. This step is required in the ASHP Bylaws and ensures that policies adopted by the House meet legal requirements, are consistent with existing policies and organizational commitments, and are financially feasible. Typically, the Board schedules a brief meeting between the first and second meeting of the June House for purposes of “duly considering” amended proposals. Occasionally, an issue may require more time for due consideration than is available between meetings of the House, in which case the matter will be referred by the Board to a council or other body for further study. The Board reports the results of its due consideration of amended proposals during the second meeting of the House.

After hearing the Board’s report on due consideration of amendments, the House has the option of reconsidering a matter, which requires the approval of two-thirds of delegates. This option is raised if the Board does not accept an amendment and the House wishes to reconsider the original language approved by the Board.

The ASHP Bylaws permit the House of Delegates to take final action on any matter placed before it if the Board of Directors rules that bona fide extraordinary circumstances require immediate action, and if a majority of delegates concur.