Austin Wilson grew up in Pendleton, Indiana where he developed an appreciation for the fields of computer science and healthcare. Upon graduating high school, he decided to pursue a Doctor of Pharmacy degree from Butler University in Indianapolis, Indiana. Austin was friends with a number of engineering students throughout his college career and developed an appreciation for the integration of computer sciences and healthcare. Once he learned about the opportunities available in clinical informatics, he began to work toward that career path. After graduating from Butler in 2015, Austin completed a PGY-1 residency at St. Vincent Anderson Regional Hospital where he had the opportunity to focus on informatics throughout all of St. Vincent Health and teaching experiences at the universities of Butler, Purdue, and Manchester. Austin is now employed as the PGY-2 Pharmacy Informatics resident at Indiana University Health in Indianapolis, Indiana where he hopes to further develop his skills as a clinical informaticist and educator.

Austin has been a member of ASHP since 2014 and has attended ASHP's Midyear Clinical Meeting since 2014. Austin will serve as a resident member of the Pharmacy Clinical Information Systems Section Advisory Group during the 2016-2017 residency year.

As Austin's rotations are primarily longitudinal, he is involved in a great number of projects including PowerChart Oncology. This informatics initiative is one of the first in the nation to fully utilize computerized provider order entry for cancer therapy. Austin is also on the Methodist Hospital Pharmacy Professional Practice council which assures pharmacy services are meeting Methodist Hospital's practice goals.

"Not only is the world of healthcare changing, but the integration of technology is changing and expanding every day. Even if a healthcare professional does not pursue or become directly involved in the informatics department, everyone must have an understanding of the technology available to them. This will help not only the individual but the health system as a whole."

"I became involved in ASHP as a student after it was suggested by my professors and classmates as a resource, networking tool, and news source. Since then, it has grown into a desire to become more involved and proactive in the profession of pharmacy as a whole."

"ASHP is a leading national organization in the pharmacy community with resources online and through specific groups in which pharmacists can become involved. Becoming a member grants you access to continued education, professional journal articles, and professional meetings which benefit practitioners and students alike."

"Being as wide-spread as it is, ASHP pulls information from current practice and desired future practice in order to shape not only the field of pharmacy but healthcare as a whole. ASHP serves as a central hub for individuals and organizations across the nation to draw and commit resources in order to improve and standardize practice." 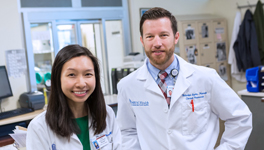