Dr. Greg Bauer received his Doctor of Pharmacy degree from The University of Georgia College of Pharmacy in 1999. After graduation, he completed the M.S. Pharmacy Residency program at The Ohio State University in 2001, earning both a Master's degree in Health-Systems Pharmacy Administration and a Pharmacy Practice Residency with an emphasis in Pharmacy Administration. Dr. Bauer completed a Clinical Toxicology Fellowship at the Georgia Poison Center in Atlanta, GA in 2002 and is also a graduate of the 2009 ASHP Pharmacy Leadership Academy. He has worked as a Pharmacy Supervisor at The Children's Hospital of Philadelphia and a Director of Pharmacy at Virtua Voorhees Hospital in Voorhees, NJ, and is currently the Director of Pharmacy Operations at Temple University Hospital in Philadelphia, PA. Dr. Bauer is also a preceptor in the Temple University Hospital Pharmacy Residency Program.

Dr. Bauer has been a member of ASHP for almost 20 years. Most recently, he became more involved with ASHP as a Pharmacy Resident abstract reviewer for the ASHP Midyear Clinical Meeting. Dr. Bauer is currently serving his first term as a member of the 2017-2018 ASHP Section of Pharmacy Practice Managers (SPPM) Section Advisory Group on Leadership Development. As a part of the advisory group, he is focusing on "hot topics" relevant to developing and maintaining leaders in today's pharmacy practice environment such as succession planning, preventing healthcare leader burnout, and developing change management skills/techniques.

Throughout his professional career, Dr. Bauer has been involved in numerous hospital pharmacy technology implementations and optimizations so he would probably say pharmacy technology is his biggest strength. Dr. Bauer has implemented two different pharmacy IV robot systems, an IV Pharmacy workflow system, and numerous automated dispensing technology systems as well as electronic medical record/pharmacy information systems. Determining how technology can improve hospital pharmacy workflows and system designs to improve the safety and efficiency of patient care is a highlight of Dr. Bauer's practice. He also really enjoys the ability of the newer technology systems to continue to provide improved data analytics that can be used to make health systems safer for patients.

"For colleagues interested in Pharmacy Administration, I would highly advise pursuing a 2-year health system pharmacy administration residency. The residency program gives you an opportunity while new in your career to see all aspects of hospital pharmacy administration. The chance to train and perfect your craft with highly successful and prestigious mentors in the world of hospital pharmacy is a once-in-a-lifetime experience. In addition to developing your professional skills, the network of pharmacy leaders you are exposed to through these programs provides professional and social contacts and networks to be used for your entire career. I would also advise new managers to move out of their comfort zones and to gain experience in the areas of pharmacy that you are less familiar with. The more things you expose yourself to, the more well-rounded of a clinician and manager you become. I was once told that there are only two types of people in the world: those that let things happen and those that make things happen and that you want to be present at the table for decisions that will impact you."

"I originally became involved in ASHP during my residency at The Ohio State University. My original experience was with the Central Ohio Society of Health-System Pharmacists and my residency project was supported through an ASHP resident research grant. After residency, I continued to stay involved in ASHP by becoming an officer of the Delaware Valley local chapter of the Pennsylvania Society of Health-System Pharmacists. The opportunities for involvement with ASHP are endless and provide pharmacists the chance to drive change in our profession."

"I recommend to all pharmacists and colleagues that I know to become members of ASHP. Whether your interests are clinical, regulatory, legislative, or administrative, ASHP has something for you to be involved in. The biggest value to me is the networking with other members, subject matter experts, and national thought leaders in pharmacy who share similar interests and have a common goal of driving the profession forward and advocating for change." 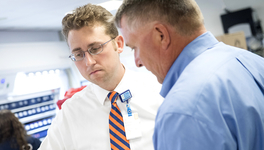