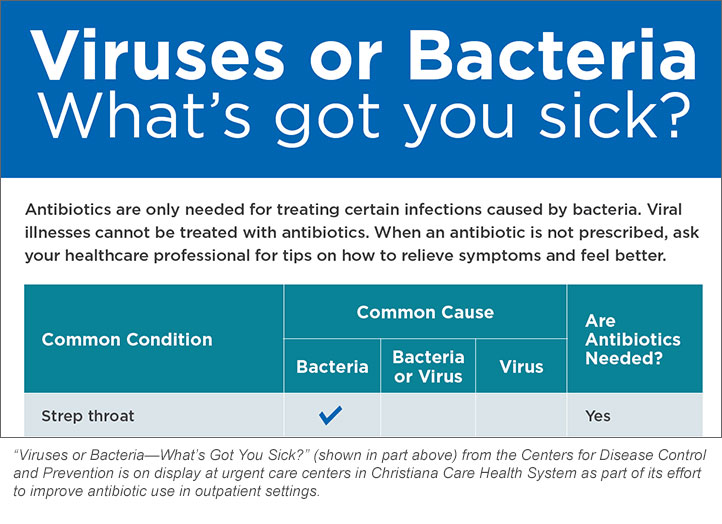 Recently published research indicates that there is an urgent need to apply antimicrobial stewardship interventions to urgent care centers—and one major health system can attest to the benefit of involving pharmacists in those interventions.

Jillian Dougherty Laude, an infectious diseases pharmacist at Christiana Care Health System in Delaware, said she helped to create the education that the antimicrobial stewardship team delivered to healthcare providers at her employer’s 5 urgent care centers and has been a sounding board for the centers’ lead physician, Harold P. Kramer.

A recent examination of the urgent care centers’ electronic medical records revealed that the number of antibiotics prescribed per 100 patient visits in June was 40% less than the number prescribed in December 2016, before interventions began, Laude said.

The antimicrobial stewardship team also found “a pretty whopping over-80% decrease” in the number of azithromycin prescriptions per 100 patient visits, she said.

Kramer expressed similar enthusiasm in his July 13 message at the Safe Healthcare Blog, hosted by the Centers for Disease Control and Prevention (CDC). He reported results compiled through March 2018.

Laude is 1 of 3 infectious diseases pharmacists in Christiana Care Health system. She stated that she has been the primary pharmacist working to improve antibiotic use in the health system’s outpatient settings and had the opportunity to help Kramer work on his blog.

A few days after Kramer’s blog went live, a team of researchers led by CDC personnel reported in JAMA Internal Medicine on antibiotic prescription rates in 2014 for outpatients younger than 65 years of age with employer-sponsored insurance.

Outpatients who went to urgent care centers and were diagnosed with respiratory illnesses for which clinical practice guidelines stated antibiotic therapy was unnecessary nonetheless ended up with antibiotics nearly half the time, the researchers reported.

At emergency departments, about one fourth of the outpatients with respiratory illnesses inappropriate for antimicrobial therapy obtained antimicrobials.

Lower rates were found for outpatients at medical offices and retail clinics, the researchers reported.

Viral upper respiratory tract infections were among the respiratory illnesses the researchers categorized as inappropriate for antibiotic therapy.

The alliance consists of Christiana Care Health System and 4 other Delaware health systems. According to press releases, the alliance’s health systems share best practices and innovations so as to raise the quality of healthcare provided to the state’s residents.

In 2017, according to the Choosing Wisely campaign, the Delaware alliance started pursuing antimicrobial stewardship. Each health system would design its own project to decrease inappropriate antibiotic prescriptions for viral upper respiratory infections in the ambulatory care setting. The goal reflects one of the Choosing Wisely recommendations.

“We wanted to start with looking at that antibiotic specifically to see if a lot of these stewardship efforts would help to decrease” utilization, which had been “very, very high,” she said.

Laude said 2 of CDC’s readily available materials on antimicrobial stewardship went on display at the urgent care centers in 2017: the chart “Viruses or Bacteria—What’s Got You Sick?” and the brochure Antibiotics Aren’t Always the Answer. Also put on display was a commitment flyer designed by Quality Insights, the state’s Medicare quality-improvement organization. The flyer, in part, states, “We are committed to prescribing antibiotics responsibly and only when necessary.”

Then, she and other members of the antimicrobial stewardship team went to one of the urgent care centers and made a presentation to the healthcare providers about infectious diseases commonly encountered at the centers, such as sinusitis, bronchitis, and pharyngitis. Team members differentiated bacterial infections from viral infections and explained why not every infection needs antibiotic therapy.

Laude said Kramer, who oversees the urgent care centers, stressed adherence to national guidelines on antibiotic prescribing and went on to perform chart audits and deliver direct feedback to the healthcare providers.

At a meeting of the health system’s patient and family advisory council, Laude spoke about antibiotic use by outpatients and presented the results of a survey designed to gauge patients’ baseline knowledge of antimicrobial stewardship.

Patients, she learned from the survey, want to know why their healthcare provider thinks that their respiratory illness is a viral infection rather than a bacterial one and thus not in need of antibiotic therapy.

Having a better understanding of the cause of their illness will “help them . . . feel that they don’t have to demand an antibiotic,” Laude said.

Also important to patients, she learned, is being told about some of the “side effects” and unintended consequences of antibiotic therapy.

Additionally, strategies not involving antibiotics must be part of the conversation with patients. “They certainly made it known as well that . . . even if they don’t come out of the office with an antibiotic, having something that will make them feel better is really important,” Laude said.

That feedback, she said, prompted the antimicrobial stewardship team to work on guidelines recommending symptom-specific treatments, such as cough suppressants, that will provide the relief sought by patients.

Laude said the health system plans to take the lessons learned from antimicrobial stewardship interventions in urgent care centers and apply them to the primary care practices.

Community-based pharmacists, she noted, have a role as well in outpatient antimicrobial stewardship because they may be the first healthcare providers approached by patients having symptoms of a viral or bacterial illness.

She spoke in May at the Delaware Pharmacists Society Annual Convention on the topic of outpatient antimicrobial stewardship, focusing on bronchitis, sinusitis, and pharyngitis and differentiating the viral forms of those infections from the bacterial forms.

Regardless of the patient setting, stated Deborah Pasko, senior director at the ASHP Center on Medication Safety and Quality, the process of antimicrobial stewardship should be used.

That means pharmacists should counsel all ambulatory care and home care patients about the appropriate use of antibiotics, symptoms of common viral illnesses not warranting a request for an antibiotic, and the need to receive appropriate vaccinations, such as those designed to prevent influenza and pneumococcal disease.

“Antimicrobial stewardship,” she stated, “aligns with the ASHP vision that medication use will be optimal, safe, and effective for all people all of the time.”