The COVID-19 pandemic started upending everyday operations at Phoebe Putney Health System in southwest Georgia about a month ago.

“We’ve been putting in long hours, all of us. It’s exhausting,” Kelvas said.

Health officials have indicated that COVID-19 may have taken root in the area in late February and early March among funeral attendees. Positive cases started appearing in the community in mid-March.

Through April 13, Phoebe Putney Health System reported 1,851 confirmed COVID-19 cases and 64 deaths, or about 13% of all cases and deaths in the state. The health system’s COVID-19 death tally through April 13 exceeded that of the Atlanta metropolitan area.

Kelvas became part of his organization’s COVID-19 statistics last week, when his test result came back positive. Other than feeling “really tired,” he said he’s doing well and hopes to return to work soon.

“I really haven’t had any symptoms, so I’m very fortunate,” he said.

Despite the challenges the pandemic has brought, the healthcare team remains focused on patient care.

Kelvas worries about his teammates. He said some pharmacy staff members have shown symptoms of infection and have been quarantined while awaiting test results.

And he acknowledged that a big wave of illness could affect the department’s ability to function.

“What happens if six of them go down sick at one time? How do you keep the schedule covered?” he asked.

The health system has staffing assistance from the Georgia National Guard, which had sent about 70 service members through early April.

“We have two pharmacists from the national guard ... working with us in our department. So that’s been really encouraging,” Kelvas said.

All Phoebe Putney patients who are suspected to have COVID-19 are kept under full isolation while awaiting test results. That wait can be several days, although the health system announced recently that it has started to implement rapid testing.

To protect staff from exposure to the virus, the health system is minimizing entry into patient rooms. For the pharmacy team, medication histories are taken by phone, and pharmacists keep code carts out of patient rooms while managing medications.

The hospital has also made operational changes, such as canceling elective surgeries and creating additional beds for COVID-19 patients. Kelvas said the main hospital’s postacute care unit was converted to a critical care ward with about 48 beds.

“And we’ve tried to cohort the patients with COVID throughout the hospital on different units,” he said.

When possible, patients who seek emergency care for reasons other than COVID-19 are treated, stabilized, and transferred to other facilities instead of being admitted.

“At some point that’s probably going to have to stop, because the other hospitals are getting filled up as well,” Kelvas noted.

Early on, he said lopinavir–ritonavir combination therapy was a treatment of choice, but the medical center didn’t have any.

“Some of the retail pharmacies helped us out with that to get our first dozen patients started on it. And our staff went out and picked up the medications themselves,” Kelvas said.

Next came hydroxychloroquine and azithromycin, which the hospital was able to procure. Now, Kelvas said, the focus is on IV critical care medications such as fentanyl, dexmedetomidine, and midazolam.

“So far, we’ve not run out of anything. That’s been a small miracle,” Kelvas said.

But keeping critical drugs in stock is an all-hands-on-deck operation for the pharmacy staff, and the needs of COVID-19 patients far outstrip usual medication use patterns.

Kelvas said the hospital has been working with the Georgia Board of Pharmacy and the Georgia Drugs and Narcotics Agency to establish a streamlined process for obtaining IV medications from 503A compounding facilities.

“We’ve gotten tremendous support from everyone,” Kelvas said. “And we’re still struggling to stay ahead of our usage.”

The community has also stepped up to support the health system.

“There’s been tremendous donation of food from a lot of the vendors that provide lunches, for example, to the staff,” Kelvas said. Community members, he said, “put a huge banner up singing our praises, that healthcare workers are heroes, [and] praying for us.”

Volunteers, he said, have sewn “thousands and thousands” of cloth masks to help stretch precious stocks of personal protective equipment.

“We now all wear these fabric masks,” Kelvas said. “They can be laundered and reused, which is amazing.” 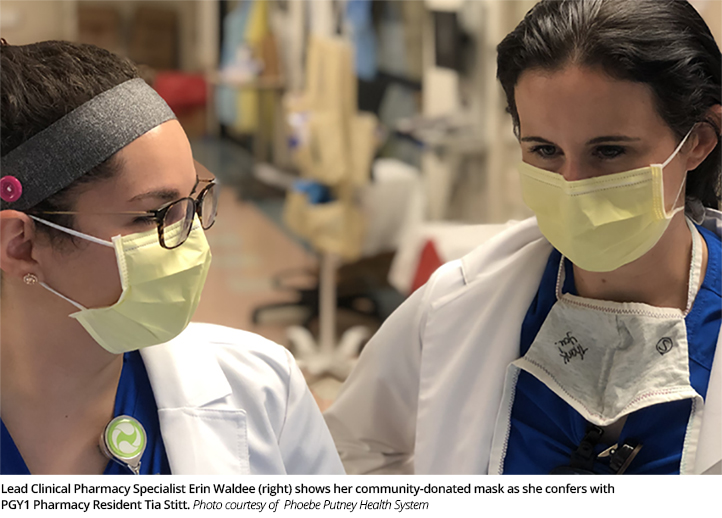 He said the health system has been working with state agencies to convert its smaller Albany hospital, Phoebe North, into a regional care center for COVID-19 patients.

“We’re diligently working to open up these additional 125 beds. About 51 of those beds will be critical care,” Kelvas said. “So you can imagine the resources that are needed to make that happen.”

He said the space may be ready at the end of this week.

The biggest challenge for the project, he said, is getting staff in place and trained and staying ahead of the drug supply.

“We’ll have to double our drug supply. And we’re still working on that,” Kelvas said.

For more information and free tools regarding the pandemic, including a recently released Assessment of Evidence for COVID-19-Related Treatments, visit ASHP’s COVID-19 Resource Center and the new COVID-19 Community at ASHP Connect.