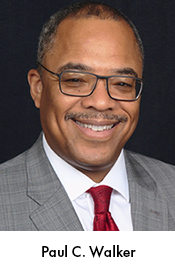 In his June 14 inaugural speech, ASHP President Paul C. Walker shared his vision of a “better together” pharmacy workforce that’s diverse, inclusive, collaborative, and ready to address health disparities and achieve better outcomes for all patients.

“A growing body of evidence proves that our patients do better when our workforce is diverse and inclusive,” Walker said. “For the benefit of our patients, it is paramount that we invest in workforce diversity that reflects the communities we serve.”

Walker said diversity encompasses age, gender, sexual orientation, ableness and other characteristics, along with race ethnicity, that make people uniquely themselves. That diversity, he said, makes us stronger as a society.

Walker is clinical professor and assistant dean of experiential education and community engagement at the University of Michigan College of Pharmacy and past chair of the ASHP Task Force on Racial Diversity, Equity, and Inclusion. His inaugural speech and formal introduction to ASHP members took place during ASHP’s 2022 Summer Meetings & Exhibition in Phoenix, Arizona.

During his remarks, Walker shared his gratitude, as a Black man, for the mentoring and collaboration he’s enjoyed from other Black pharmacists during his career. Reports based on federal data suggest that roughly 7–8% of U.S. pharmacists are Black.

“Being in a profession where Black Americans are underrepresented, I have also been in mentoring relationships and collaborations with people who were not Black,” Walker said. “And I am better for the diversity of my relationships.”

He also emphasized that the burden of cancer, cardiovascular disease, diabetes, obesity, kidney disease, and other illnesses is heaviest among Blacks and other people of color. And he challenged pharmacists to address the longstanding disparities in care that adversely affect the health of these patients.

“Health disparities include inferior pharmacotherapeutic outcomes. Those reside squarely in our wheelhouse,” Walker said. “Studies continue to find that disparities exist for people of color in the use of evidence-based treatments. Even when insurance status, income, age, and the severity of condition are adjusted for, people of color tend to receive lower-quality healthcare [than] white Americans.”

That trend continued as the nation responded to the COVID-19 pandemic, according to reporting from the National Urban League and the National Academies of Medicine.

“The severity of COVID-19 among Black Americans was the predictable result of structural and societal realities, not differences in genetic predisposition,” Walker said. “Structural racism and discrimination — the primary causes of health disparities in the United States — are pervasive in our healthcare system.”

Walker also highlighted the epidemic of violence against blacks and people of color, before and during the pandemic, that cries out for action from all professions. And he said the names — George Floyd, Breonna Taylor, Patrick Lyoya — of some of the Black Americans who have recently died at the hands of police.

“This outrageous violence perpetrated by police against people of color is also a public health problem,” Walker said. “It significantly drives unnecessary and costly injury, morbidity, and premature death among people of color.”

ASHP policy recognizes violence as a public health crisis and affirms the important role of the pharmacy workforce in violence prevention. Walker encouraged pharmacists to lead “initiatives in our communities and workplaces to counter the societal and public health impact of violence.”

Walker praised the work of his colleagues on ASHP’s Task Force on Racial Diversity, Equity, and Inclusion, which has created a blueprint for ASHP, other organizations, and the broader community to advance health equity.

The task force’s recommendations have already resulted in the nomination of the most diverse slate of candidates for elected offices in ASHP’s history. And the task force’s work has spurred important new ASHP initiatives, such as the launch of the ASHP Inclusion Center, the development of a major educational series on combatting bias and disparities in care, and the creation of a mentorship program that connects student pharmacists of color with seasoned practitioners.

Walker said the group will continue its transformative work in the days ahead.

“We are in a moment that requires us to invest in different ways of doing things to produce better outcomes for all patients,” Walker said. “Equity and inclusion are imperative for successful collaboration — in healthcare and in society.”