If the decade of the sixties is to go down in history for its positive accomplishments—in spite of such blots as violence in our streets and the assassinations of three great Americans—the resounding voice and influence of the consumer is one notable observation. We, as citizens and consumers, have finally come out of our shell of complacency. We are demanding quality and safety in all aspects of our life, and our government must not fail to respond to our cry. Americans are demanding quality and safety in our air and water, in our household appliances, in our President’s nominees to the Supreme Court of the United States, in our drugs, in our total health care. This quest for excellence has affected all professions, business enterprises, and organizations which collectively comprise American society—from giant corporations which manufacture automobiles or drugs that are sometimes less than safe, to professionals who provide health care which is often less than optimum.

In this new era of consumerism, it is easy to strike wildly. The hippie philosophy appears to be that nothing is worth saving, that it is better to destroy our social structure completely and start again from scratch. This element is adept at identifying what is wrong but almost totally inept at offering remedies. Despite the problems and injustices in our contemporary society, I believe there is much good that needs to be preserved. As responsible citizens and professionals, we need to retain what is good in all aspects of our lives, including the delivery of health care and the practice of pharmacy, and rebuild only what is bad. This constructive approach must not be allowed to give way to destruction of our very principles and foundations.

Among the many problems of contemporary America—problems that require immediate attention through a constructive approach—is that of providing adequate health care. Our health resources are being strained beyond their limit. Among the factors exerting pressure on our health resources are population growth, the changing age structure of the population, better education, urbanization, and the long overdue realization that good health care is a right of all citizens, including the poor and the aged. Still, perhaps more progress has been made in the health sciences in the past decade than during the entire half-century preceding it. This progress, in large measure, can be attributed to the increased willingness and obligation of our government of the people to respond to the health care needs of all citizens. We are in the midst of a new era of the consumer, and his bill of rights is irrevocable. There is no turning back.

Along with government, health practitioners and, through them, their associations and organizations deserve credit for their role in improving the quality, scope, and availability of health care. Unfortunately, some have lagged behind and have only adjusted their blinders in a futile attempt to preserve the status quo. Among organizations in the health field, our own American Pharmaceutical Association and American Society of Hospital Pharmacists need not take a back seat to any in terms of aggressiveness, progressiveness, and social as well as professional commitment. 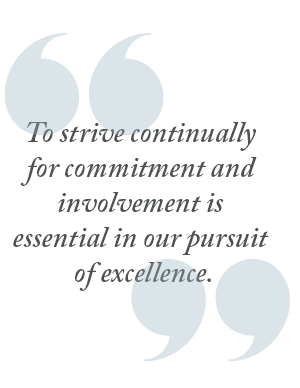 I believe we are well prepared for the decade ahead. Early in this decade, it will be necessary for this nation to enunciate a basic policy of health goals at all levels and to delineate the mechanisms which will be required to support this policy. Pharmacy must participate, and it must do so with the realization that no single element of the profession nor, indeed, any single member of the profession has a monopoly on ideas. Working together, I am confident that we can demonstrate the commitment and involvement that will be required. In participating in the development of a policy for health care, pharmacy must make a place for its students and its youth; they have amply demonstrated that they have the commitment, but we must now provide more opportunity for meaningful involvement.

In considering some of the possible causes and effects of a national health policy, one observation stands out. Despite the continuing need for total, integrated delivery of health care, such care will be largely institution based—not necessarily within four walls but emanating from behind the walls and extending into the community. Further, it is already evident that total health care is shifting towards large institutions, and this pattern will probably continue for reasons of efficiency and economy. The small hospital, despite its importance and continued need, will care for proportionately fewer and fewer patients as a system continues to develop. One social force that is accelerating the trend towards institution-based health care is the migration of the independent, solo health practitioner, along with his affluent patients, to suburbia, leaving the inner city and rural America deficient in the availability of health care services. This deficiency will never be solved on a solo practice basis—some form of institutional or group practice is the only answer. In short, health care will revolve more and more around the institutional setting regardless of the number of pharmacists who will be considered institutional practitioners as opposed to community practitioners.

Other observations with specific reference to pharmacy will influence our national health policy:

It is abundantly clear that the practice of pharmacy must better adapt to contemporary needs. Pharmacy, individually and collectively, must rise to the occasion, and organized pharmacy must lead the way. In light of the developments taking place around us, some basic questions require answers:

Can a coordinated organizational system for American pharmacy evolve which has as its basic objective the interest of the public in matters relating to clinical pharmacy and drug use control?

Can this coordinated organizational system be so designed as to be truly representative of, and responsive to, practitioners in different settings who perform a variety of specialized functions?

Is it possible that there should be more emphasis on unity of purpose and cooperative organization—on unison as well as on “one voice” for pharmacy?

Past Whitney recipient Latiolais, in his lecture two years ago, called for an “organizational audit” of the ASHP and its affiliated chapters. Such an audit, he stated, “would involve an in-depth self-appraisal of goals and objectives, practices and services, membership and staff, membership needs and capabilities, affiliated chapter activities and requirements, and overall strengths and weaknesses.” Mr. Latiolais continued: “Indeed, such an organizational audit could pave the way for unparalleled achievement within the sphere of organized American pharmacy.” I concur that an organizational audit is called for. Further, I believe that such an audit should be applied to organized American pharmacy as a whole.

A movement is a connected and long series of events leading toward a goal. In contrast, an episode happens and comes to an end; it is an independent action that stands alone. A review of the records shows that the hospital pharmacy movement is a series of interrelated, planned events which continuously generates new events.

Dr. Francke then continued by separating the events of the American hospital pharmacy movement into four rather distinct phases. A decade has passed since the beginning of the fourth phase. In view of the developments and influences we have pondered, perhaps it can be said that we are now entering the fifth phase of the American hospital pharmacy movement, a phase which may be identified with the new challenges which face us. Throughout all phases, we have witnessed a commitment and involvement on the part of members of the American Society of Hospital Pharmacists unparalleled in the history of the profession. Today, more than ever before, we are being asked to dedicate ourselves to a life of commitment to and involvement in the things that face us daily in our homes, our profession, our government, and in a host of activities relating to our existence on earth.

To strive continually for commitment and involvement is essential in our pursuit of excellence. But in this pursuit, we must keep in mind always the warning of John W. Gardner who, as President of the Carnegie Foundation, wrote:

A society that has reached the heights of excellence may already be caught in the rigidities that will bring it down. An institution may hold itself to the highest standards and yet already be entombed in the complacency that will eventually spell its decline.

This is a danger to which we must ever be alert.

And so, as we enter the decade of the seventies, almost three decades removed from the founding of the Society and two decades since the establishment of the Harvey A. K. Whitney Lecture Award, we are challenged with a resolve for greater commitment and involvement not in terms of self-interest but, in a larger and more meaningful sense, in terms of public welfare.

All of this can be summarized succinctly, I believe, by a quote from the Society’s Statement on Goals for Hospital Pharmacy:

History shows that groups which unite with a purpose, which give a selfless service for the greater good, which make plans and keep driving forward, which set immediate objectives yet maintain a degree of flexibility, which prepare themselves for the future—are those which make tremendous progress.

Any references cited in this lecture are available in the PDF version.